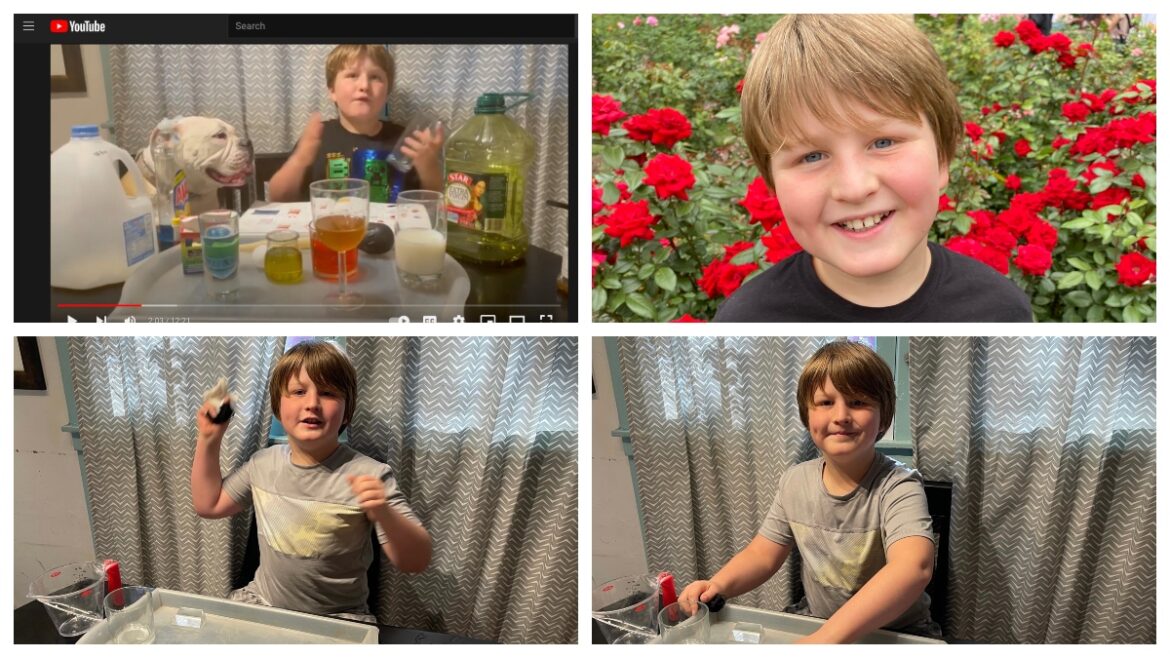 When we hear that “learners need to own their learning,” we may get different ideas of what that looks like. We may picture a learner who is taking it upon themselves to pursue learning deeply while investigating, exploring, creating and sharing. Or we can meet nine-year-old Enzo Cosio.

Enzo – a fourth grader at iLEAD Exploration – is pursuing his love of science and learning by hosting his own YouTube Channel called Science Nerds with Dogs & Birds. As of this writing, he has produced eight video segments ranging from about four – 13 minutes that feature him explaining a scientific phenomenon through a lab or experiment and a whole lot of personality.

With a goal of making two videos per his school’s Learning Period (LP), Enzo said he has always been interested in science and the way the world works.

“It’s fun to find out how things work and share with others,” he said. “I like it when others get excited or are blown away.”

For his subscribers or anyone who sees his videos, they will attest to not only his amazing knowledge and skill, but his authentic exuberance and enthusiasm for both the subject and the audience.

“People want to see things, have things demonstrated,” said Enzo. “It’s an equal amount of learning and fun. We try to give reasons for people to want to watch again.”

Initially, he said he was inspired by his love of science and wanted to do something to share his love with others.

“I always thought making some YouTube videos would be cool. It’s something I can do that doesn’t cost money,” he said. “I figured I love science and I have the technology. So, I thought why not?”

Starting with one video – which examined the Surprising Amount Of Sugar In Coke – Enzo said his initial feedback inspired him to think about doing this on a regular basis and develop his own YouTube Channel.

“After the first video, I got five followers,” he said. “That was exciting to me and inspired me to keep going.”

Science topics on the channel include sound waves, density, experiments one can do at home and applications of the Scientific Method. For all of these videos, Enzo clarified that he uses YouTube Kids. Although he acknowledged the downsides that include the inability to make comments or receive notifications, he said, “It’s good though because we know it’s safe and we can keep viewers from making negative or inappropriate comments.”

According to Enzo, who also does all of his own video editing, he gains much of his scientific knowledge from resources such as science books, as well as online journals and sites such as Wikipedia. He acknowledges that he does have real world science heroes such as Elon Musk, while also having YouTube science influences such as Mark Rober.

For those that know Enzo, none of this comes as much of a surprise. His educational facilitators and family have long been inspired by his love of learning and his willingness to pursue it with relentless passion and authenticity.

His current iLEAD Exploration Educational Facilitator Jennifer Hudson said she finds his work so inspiring because he has a true sense of wonder and presents his findings about science topics with such natural enthusiasm.

“Enzo delves into the science behind the experiments and demonstrations in his videos. He is learning advanced academic vocabulary and content and is able to translate this content into everyday language,” said Hudson. “When I watch experiments on his youtube channel, I want to try them too.

His mother Jessica – who describes the family as ‘non-science people’ – said that this work is all about Enzo’s natural interests and abilities.

“We are parenting the child that we have and we do what is best for Enzo,” she said. “He likes to do a deep dive when learning and the flexibility and creativity created by iLEAD allows for this.”

Jessica said that the family initially had no intention of homeschooling Enzo, but that this way of schooling and learning has really allowed everyone to meet Enzo where he is.

“I think all children are trying to order their world, but the adults may often limit them,” she said. “This is all Enzo.”

Cosio said that Enzo’s education is a family affair. His grandfather Jeff (who Enzo affectionately calls GG) serves as his YouTube Videographer and works with Enzo during the day on academic foundations. His father Sam focuses on extended learning such as field study and learning adventures while mom said she handles much of the paperwork.

When not making videos and pursuing his love of science, one might find Enzo taking a hike, working in the vegetable garden, practicing the piano, playing Minecraft or reading a good book. In addition to long-term interests of becoming a scientist or engineer, Enzo said he also has interest in discovering a new element and learning more about space exploration.

Meanwhile, he’s planning his next video installment What Are Waves (Part III) which will focus on light waves and feature lasers, prisms and other materials.

Enzo encourages anyone who is interested to subscribe to Science Nerds with Dogs & Birds. After I became his 30th subscriber, Enzo told me, “I should have had some swag for you.” 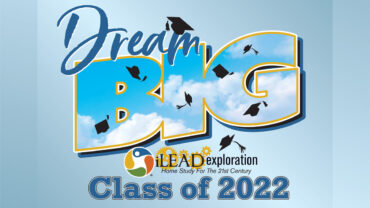 Congratulations to all of our 2022 high school graduates! It takes a tremendous amount of hard work and perseverance to accomplish a goal like this and we are so proud… 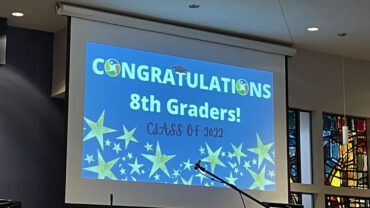 Our 8th grade promotion was a huge success. We are excited for these learners’ bright futures as they embark on their high school journey. Congratulations on completing this important milestone…. 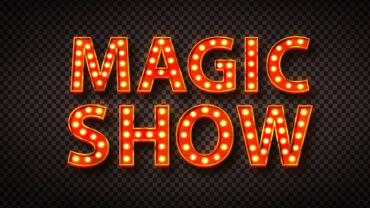 Our End of the Year SLOganeer Cheer with iLEAD Exploration took place last week. We had a great turnout and would like to thank all of you who participated. Each…